Mini Juliana pigs are the most beautiful pets you can have.

Juliana Pig Breed Info (The Only Guide You Need!)

The origins of Juliana pigs are unknown, and they are not recognized as true breeds.

They were, however, bred first in Europe to accompany owners as their pets on farms. They were created by selectively combining with other small pig breeds.

Juliana pigs are called miniature painted pigs due to their colorfully spotted appearance.

They have a long, lean, athletic body resembling a smaller version of a giant hog or feral pig.

Their body color has many variations like rust, silver, black, cream, red, or white colored.

They are called painted pigs because their coat markings look painted and differ from the coat color. The markings are black on a white coat, but there are many other variations.

A full-grown Juliana piglet will measure 10 to 16 inches in height and weigh between 20 and 40 pounds.

Their life expectancy is 10 to 15 years, but usually, Juliana pigs don’t live past five years due to genetic disorders caused by interbreeding and immuno skeletal issues.

Owning a Juliana pig is similar to owning a dog. Their curious nature makes them bored very soon, and things around your home may be the target of their curiosity.

Though they are companion animals, they are most suited to an outdoor environment where they get plenty of space to move around and have fun.

Once outside, don’t forget to provide them substantial shelter as your pet pig is susceptible to extreme hot and cold weather.

They also need protection from insect bites, parasites, and sunburn. A shallow mud pit will do the job, as it will call them on hot days, and act as an insect repellent, sunscreen, and skin conditioner simultaneously.

Fencing is another concern to secure your pet pig from predators.

Pigs are omnivores and require a balance of vitamins, minerals, carbohydrates, fiber, and proteins. You can purchase mini pig feed from the store as well.

They will also be good with vegetable and fruit scraps, as long as they are not spoiled.

Juliana pigs are legal in every state of the US, according to the USDA.

Most people think eating them is unethical due to their pet status, but that’s not true.

Juliana pigs are farmed mainly because they can be bred on small farms and cost less.

So can you eat Juliana pigs? Yes, you can because they taste like all other pork species. Without worrying, you can cook delicious recipes and eat them without a second thought.

Here are some frequently asked questions about Juliana Pigs.

How much is a Juliana pig?

A purebred seven-week-old small Juliana pig sells for around $1000*.

How big do Juliana pigs get?

Juliana pigs will grow mainly during the first year of their life, which will continue till the third year. During this time, their weight will reach nearly 40 – 80 pounds depending on the diet you feed them.

Juliana pigs are very popular and make good pets because they are officially bred as companion pets to be pleasant and friendly. They are also brilliant, love to snuggle, and get along with other pet animals on the premises.

What is the smallest pig breed? 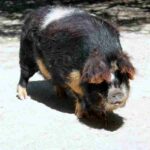 The smallest pig breed is the Kunekune.

Can Juliana pigs live outside?

Juliana pigs can live outside when the weather is warm or cool. During extreme weather conditions, you must consider their housing with an insulator like a straw bed for them to get warm and comfortable.

Do Juliana pigs get tusks?

Juliana pigs may get tusks if they are not neutered or spayed. On average, the male Juliana pigs get their first tusk trim between two and three years of age.

Juliana pigs shed during the coat-blowing season, allowing them to lose all of their hair. Once the skin blowing is done, they will grow back a fresh coat of new hair.

Mini pigs are intelligent animals and need more stimulation than other pets; if they choose, they can be purposefully more destructive than you think. They have a natural destructive instinct to root and tear things apart, and chewing your furniture is just one of them. This is especially true if your mini pig goes through the teething stage when they are younger.

How much space does a Juliana pig need?

If your Juliana pig is bulkier, then he needs more space. As a rule of thumb, a Juliana pig pair might need a pen measuring at least 12 square meters, or about 0.5 square feet per kilogram of every pig’s body weight.

Yes, mini pigs can carry diseases because they are equally hosting to several bacteria, ringworms, and viruses like other livestock animals. These germs cause intestinal illnesses in humans. 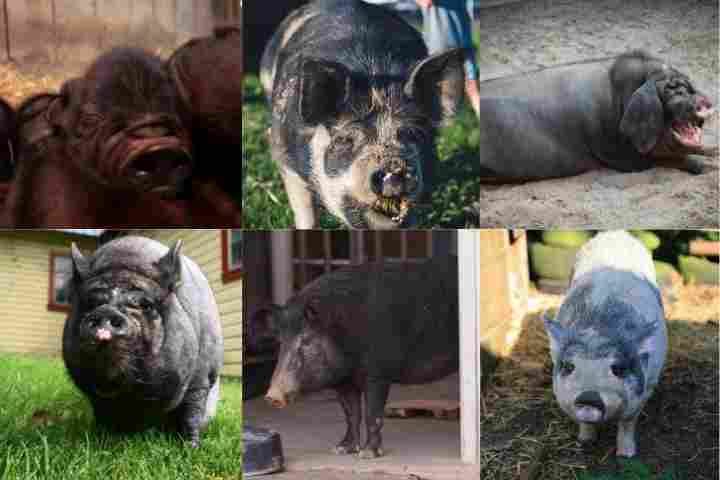